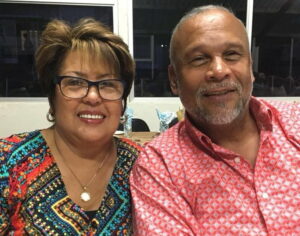 BiographicalID 46. Pastor Greg was born in 1958, one of seven children. He grew up in Cape Town during ‘apartheid’. He encountered racial prejudice that lead to forceful removal, inferior education and limited employment. But his greatest encounter was when he met the Lord in May, 1978. His life was radically changed by the power of the Lord and almost immediately he felt the call to preach and resigned from his job as a telephone technician. He completed his Licentiate in Theology at the Baptist Seminary in Athlone. He married Ursula and together have 2 children, Yolanda and John, plus some grandchildren. For the last 28 years, he has pastored several Baptist churches, Springwood, Beacon Valley, West and is currently at Athlone Baptist Church near Cape Town. They feed and clothe the homeless.

House of Prayer met Pastor Greg when our choir served in South Africa with Multi Ministries.