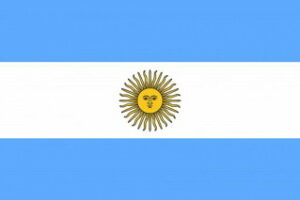 Before Europeans came to Argentina it was thinly populated. In the Northwest, people grew crops such as potatoes and squash. They sometimes lived in walled towns and they used metal and made pottery. However, most of the indigenous people lived by hunting animals and gathering plants. They continued their hunter-gatherer lifestyle until the late 19th century.

Europeans arrived in what is now Argentina in the 16th century. In 1516 Juan de Solis reached the River Plate but he was killed by the natives. He was followed by Sebastian Cabot who reached the River Plate area in 1526. Then in 1536 Pedro de Mendoza led an expedition to the area and he built a fort. However, the Spaniards were forced to withdraw by hostile natives.

Nevertheless later in the 16th century, several towns were founded in the Northwest of what is now Argentina. Buenos Aires was founded in 1580 to give access to the sea. Yet the southern part of Argentina was left in the hands of the natives. Finally, in 1776 a new Viceroy of the River Plate was formed with Buenos Aires as its capital.

In 1806 the British captured Buenos Aires but they were forced to withdraw. In 1807 they attacked the city again but they were repelled. Nevertheless, links between Argentina and Spain weakened in the early 19th century especially after 1808 when Napoleon forced the Spanish king to abdicate and made his own brother king of Spain. Finally, on 25 May 1810, the Viceroy was deposed and a junta took control of Argentina. However, the junta did not break all links with Spain until 1816. The United Provinces of the River Plate was declared on 9 July 1816.

At first, the United Provinces consisted of what is now Argentina, Bolivia, and Uruguay. However, the new state was bitterly divided between unitarists who wanted a strong central government and federalists who wanted a loose federation of provinces.

Eventually, in the 1820s the new state broke up. Bolivia became independent in 1825 and Uruguay was created as a buffer state between Argentina and Brazil in 1828 after a war between the two countries.

In 1835 General Juan Manuel de Rosas became dictator of Argentina. He was a federalist but ironically he introduced a strong (and repressive) central government. However, Rosas eventually alienated many people in the provinces, and in 1852 a rebellion removed him from power.

Until the late 19th century the natives of Southern Argentina lived in their traditional way. However, in 1879 General Julio Rica led an army to conquer them. The Conquest of the Desert was over by 1880.

In the 1920s Argentina was the 7th richest country in the world. However Argentina, like the rest of the world, was affected by the Wall Street Crash.

In 1930 the army staged a coup and General Jose F. Uriburu became president of Argentina. Uriburu called an election in 1931 (although a major party, the Radical Party was banned from taking part). Another election was held in 1937. Despite many accusations of electoral fraud, Roberto Ortiz became president with Ramon Castillo as vice-president. Ill health forced Ortiz to hand over power to Castillo in 1940. However, in 1943 the army staged another coup.

In January 1944 Argentina severed diplomatic relations with Germany and Japan. Finally on 27 March 1945, Argentina declared war on Germany. n After the 1943 coup Juan Peron gradually emerged as the leader. In 1946 he was elected president. Peron introduced a number of welfare measures and nationalized industries. Peron was re-elected in 1951 but he gradually lost support. In 1955 a revolution called the Revolution of Liberation forced Peron to flee abroad.

However military dictatorship did not bring peace. In May 1969 rioting broke out in Cordoba. The unrest spread throughout Argentina. Meanwhile, inflation raged.

Yet in 1973 the army allowed more elections and the Peronists (supporters of Peron) won. A Peronist called Hector Campora became president. Peron then returned from exile and Campora resigned to make way for him. More elections were held in September 1973 and Peron became president. However, Peron died in 1974 and his widow Isabel Peron took power. Under her rule inflation and unrest continued. Finally, in March 1976, the army seized power again.

Argentina then suffered a brutal military dictatorship during which thousands of people ‘disappeared’ during a ‘dirty war’. Meanwhile, inflation continued to rage and Argentina became heavily indebted.

In the early 1980s, despite the repression protests spread across Argentina. To try and divert people’s minds from their problems the junta invaded the Falkland Islands on 2 April 1982. However, the war turned into a disaster when the British quickly recaptured the islands.

However, Alfonsin was unable to solve the problem of hyperinflation in Argentina despite austerity plans introduced in 1985 and 1987. In 1989 Alfonsin handed over power peacefully to the next elected president Carlos Saul Menem. During the 1990s Menem managed to curb inflation and he privatized industry.

In 2001-2002 Argentina suffered a severe recession. However, the economy then grew strongly for a few years. Today the economy of Argentina is growing steadily.

Meanwhile, in October 2007 Cristina Kirchner became the first elected woman president of Argentina. Then in 2015, Mauricio Macri was elected president. In 2020 the population of Argentina was 45 million.1