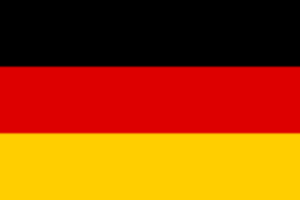 Warning: This documentary is not for children.

Source: https://www.nationsonline.org/oneworld/History/Germany-history.htm and the Library of Congress

Ununited Germany. In its long history, Germany has rarely been united. For most of the two millennia that Central Europe has been inhabited by German-speaking peoples, such as the Eastern Franks, the area now called Germany was divided into hundreds of states, many quite small, including duchies, principalities, free cities, and ecclesiastical states. Not even the Romans united what is now known as Germany under one government; they managed to occupy only its southern and western portions. In A.D. 800 Charlemagne, who had been crowned Holy Roman emperor by Pope Leo III, ruled over a territory that encompassed much of present-day Belgium, France, Germany, the Netherlands, and Switzerland, but within a generation its existence was more symbolic than real.

Medieval Germany. Medieval Germany was marked by division. As France and England began their centuries-long evolution into united nation-states, Germany was racked by a ceaseless series of wars among local rulers. The Habsburg Dynasty’s long monopoly of the crown of the Holy Roman Empire provided only the semblance of German unity. Within the empire, German princes warred against one another as before. The Protestant Reformation deprived Germany of even its religious unity, leaving its population Roman Catholic, Lutheran, and Calvinist. These religious divisions gave military strife an added ferocity in the Thirty Years’ War (1618–48), during which Germany was ravaged to a degree not seen again until World War II.

Peace of Westphalia. The Peace of Westphalia of 1648 left German-speaking Europe divided into hundreds of states. During the next two centuries, the two largest of these states—Prussia and Austria—jockeyed for dominance. The smaller states sought to retain their independence by allying themselves with one, then the other, depending on local conditions. From the mid-1790s until Prussia, Austria, and Russia defeated Napoleon at the Battle of Leipzig in 1813 and drove him out of German territory, much of the area was occupied by French troops. Napoleon’s officials abolished numerous small states; as a result, in 1815, after the Congress of Vienna, German territory consisted of only about 40 states.

Revolutions for Unification and Democracy. During the next half-century, pressures for German unification grew. Scholars, bureaucrats, students, journalists, and businessmen agitated for a united Germany that would bring with it uniform laws and a single currency and that would replace the benighted absolutism of petty German states with democracy. The revolutions of 1848 seemed at first likely to realize this dream of unity and freedom, but the monarch who was offered the crown of a united Germany, King Friedrich Wilhelm IV of Prussia, rejected it. The king, like the other rulers of Germany’s kingdoms, opposed German unity because he saw it as a threat to his power.

Otto von Bismarck. Despite the opposition of conservative forces, German unification came more than two decades later, in 1871, following the Franco-Prussian War, when Germany was unified and transformed into an empire under Emperor Wilhelm I, king of Prussia. Unification was brought about not by revolutionary or liberal forces but rather by a conservative Prussian aristocrat, Otto von Bismarck. Sensing the power of nationalism, Bismarck sought to use it for his own aims, the preservation of a feudal social order and the triumph of his country, Prussia, in the long contest with Austria for preeminence in Germany. By a series of masterful diplomatic maneuvers and three brief and dazzlingly successful military campaigns, Bismarck achieved a united Germany without Austria. He brought together the so-called “small Germany,” consisting of Prussia and the remaining German states, some of which had been subdued by Prussian armies before they became part of a Germany ruled by a Prussian emperor.

Prussian hegemony. Although united Germany had a parliament, the Reichstag, elected through universal male suffrage, supreme power rested with the emperor and his ministers, who were not responsible to the Reichstag. The Reichstag could contest the government’s decisions, but in the end the emperor could largely govern as he saw fit. Supporting the emperor were the nobility, large rural landowners, business and financial elites, the civil service, the Protestant clergy, and the military. The military, which had made unification possible, enjoyed tremendous prestige. These groups were pitted against the Roman Catholic Center Party, the Socialist Party, and a variety of liberal and regional political groups opposed to Prussia’s hegemony over Germany. In the long term, Bismarck and his successors were not able to subjugate this opposition. By 1912 the Socialists had come to have the largest number of representatives in the Reichstag. They and the Center Party made governing increasingly difficult for the empire’s conservative leadership.

The World Wars. In World War I (1914–18), Germany’s aims were annexationist in nature and foresaw an enlarged Germany, with Belgium and Poland as vassal states and with colonies in Africa. However, Germany’s military strategy, involving a two-front war in France and Belgium in the west and Russia in the east, ultimately failed. Germany’s defeat in 1918 meant the end of the German Empire. The Treaty of Versailles, the peace settlement negotiated by the victors (Britain, France, and the United States) in 1919, imposed punitive conditions on Germany, including the loss of territory, financial reparations, and a diminished military. These conditions set the stage for World War II.

Weimar Republic. A republic, the Weimar Republic (1919–33), was established with a constitution that provided for a parliamentary democracy in which the government was ultimately responsible to the people. The new republic’s first president and prime minister were convinced democrats, and Germany seemed ready at last to join the community of democratic nations. But the Weimar Republic ultimately disappointed those who had hoped it would introduce democracy to Germany. By mid-1933 it had been destroyed by Adolf Hitler, its declared enemy since his first days in the public arena. Hitler was a psychopath who sensed and exploited the worries and resentments of many Germans, knew when to act, and possessed a sure instinct for power. His greatest weapon in his quest for political power, however, was the disdain many Germans felt for the new republic.

Many Germans held the Weimar Republic responsible for Germany’s defeat in World War I. At the war’s end, no foreign troops stood on German soil, and military victory still seemed likely. Instead of victory, however, in the view of many, the republic’s Socialist politicians arranged a humiliating peace. Many Germans also were affronted by the spectacle of parliamentary politics. The republic’s numerous small parties made forming stable and coherent coalition governments very difficult. Frequent elections failed to yield effective governments. Government policies also often failed to solve pressing social and economic problems.

Hitler as Chancellor. A modest economic recovery from 1924 to 1929 gave the Weimar Republic a brief respite. The severe social stress engendered by the Great Depression, however, swelled the vote received by extreme antidemocratic parties in the election of 1930 and the two elections of 1932. The government ruled by emergency decree. In January 1933, leading conservative politicians formed a new government with Hitler as chancellor. They intended to harness him and his party (the National Socialist German Workers’ Party, or Nazis), now the country’s largest, to realize their own aim of replacing the republic with an authoritarian government. Within a few months, however, Hitler had outmaneuvered them and established a totalitarian regime. Only in 1945 did a military alliance of dozens of nations succeed in deposing him, and only after his regime and the nation it ruled had committed crimes of unparalleled enormity known as the Holocaust.

The Postwar Era and Unification. In the aftermath of World War II (1939–45) and following occupation by the victorious powers (the United States, the Soviet Union, Britain, and France), Germany came to consist of two states. One, East Germany, never attained real legitimacy in the eyes of its citizens, fell farther and farther behind economically, and had to use force to prevent its population from fleeing to the West. The other, West Germany, was resoundingly successful. Within two decades of defeat, it had become one of the world’s richest nations, with a prosperity that extended to all segments of the population. The economy performed so successfully that eventually several million foreigners came to West Germany to work as well. West German and foreign workers alike were protected from need arising from sickness, accidents, and old age by an extensive, mostly nongovernment welfare system. In 1990 German unification overcame the geographic separation of the two German states, including an infamous wall between West Berlin and East Berlin, but economic integration still has not been achieved satisfactorily. In the first decade of the twenty-first century, the forces of globalization are posing a renewed challenge to the social-market economy in place throughout the nation.1