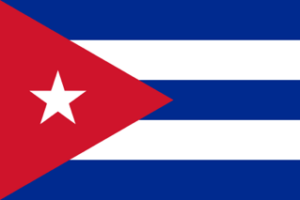 The first European to reach Cuba was Christopher Columbus in 1492. At that time the indigenous people lived by farming. They grew cassava, maize, and yams. They also smoked tobacco. In 1511 Diego Velasquez conquered the island of Cuba and he founded several settlements including Havana. The natives were devastated by European diseases, to which they had no resistance. From 1526 the Spanish imported African slaves into Cuba.

By the late 18th century Cuba was prospering by growing and exporting sugar. The plantations were worked by huge numbers of slaves. However, in the 19th century, there was an increasing movement for independence.

The struggle for Cuban independence began in 1868 when a landowner named Carlos Manuel de Cespedes freed his slaves. So began the Ten Years War. It ended in failure in 1878. Then in 1886 slavery in Cuba was abolished.

The Second War of Independence began in 1895. In 1898 the USA went to war with Spain. US forces invaded Cuba and Spain surrendered shortly afterward. The peace treaty made Spain relinquish all claims to Cuba. However, after the war, Cuba was occupied by US forces for nearly 4 years. They left in 1902 and Cuba became nominally independent but in reality, it was dominated by the USA.

In the early 20th century most people in Cuba remained very poor despite efforts to modernize the country. In 1924 Gerardo Machado was elected president of Cuba. The constitution barred him from more than one term but when his term ended in 1928 Machado held onto power. However, Machado was overthrown in 1933. After a period of unrest, Cuba gained a new and democratic constitution and elections were held.

In 1952 Fulgencio Batista staged a coup in Cuba and became its dictator. At that time compared to other Latin American countries Cuba was prosperous and its people had a relatively high standard of living. Literacy rates were high and health care was relatively good. Education in Cuba was of a high standard. Cuba was known for its writers.

Then in 1959, Fidel Castro led a revolution in Cuba. However, Castro did not bring freedom to Cuba. Instead, he made himself dictator. Castro introduced a repressive Communist regime. Independent labor unions were made illegal and all political dissent was crushed. n However the lesson of history is that Socialism does not work. The Cuban economy stagnated during the 1960s and 1970s.

Meanwhile, Cuba became a satellite of the Soviet Union. Many people fled from Communism. Many Cubans escaped to the USA. Many more died trying. (Many people drowned trying to cross the sea).

Meanwhile relations with the USA deteriorated and in 1961 1,400 Cuban emigres, trained by the CIA were sent to invade Cuba. They landed at the Bay of Pigs but the invasion ended in total failure. In 1962 the USA imposed a blockade on Cuba.

Furthermore, Cuba was economically dependent on the USSR. When the Soviet Union broke up in 1991 the situation in Communist Cuba became desperate. Living conditions for ordinary people in Cuba became even worse. They suffered shortages of food. So Castro was forced to allow some free enterprise. He also opened up Cuba to tourism.

Then in 2008, Fidel Castro resigned. Meanwhile, in 1998 the Pope visited Cuba for the first time.

Today Cuba is still a dictatorship. However, the end of an era came in 2014 when the USA and Cuba normalized relations. In 2020 the population of Cuba was 11 million.1