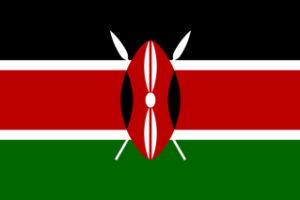 Portuguese explorers appeared on the East African coast at the end of the 15th century. The Portuguese did not intend to found settlements, but to establish naval bases that would give Portugal control over the Indian Ocean. After decades of small-scale conflict, Arabs from Oman defeated the Portuguese in Kenya.

The Portuguese became the first Europeans to explore the region of current-day Kenya: Vasco da Gama visited Mombasa in April 1498. Da Gama’s voyage successfully reached India (May 1498), and this initiated direct maritime Portuguese trade links with South Asia, thus challenging older trading networks over mixed land and sea routes, such as the spice-trade routes that utilised the Persian Gulf, Red Sea and caravans to reach the eastern Mediterranean. (The Republic of Venice had gained controlover much of the trade between Europe and Asia. Especially after the Ottoman Turks captured Constantinople in 1453, Turkish control of the eastern Mediterranean inhibited the use of traditional land-routes between Europe and India. Portugal hoped to use the sea route pioneered by da Gama to bypass political, monopolistic and tariff barriers.)

Portuguese rule in East Africa focused mainly on a coastal strip centred in Mombasa. The Portuguese presence in East Africa officially began after 1505, when a naval force under the command of Dom Francisco de Almeida conquered Kilwa, an island located in the south-east of present-day Tanzania.

The Portuguese presence in East Africa served the purpose of controlling trade within the Indian Ocean and securing the sea routes linking Europe and Asia. Portuguese naval vessels disrupted the commerce of Portugal’s enemies within the western Indian Ocean, and the Portuguese demanded high tariffs on items transported through the area, given their strategic control of ports and of shipping lanes. The construction of Fort Jesus in Mombasa in 1593 aimed to solidify Portuguese hegemony in the region. The Omani Arabs posed the most direct challenge to Portuguese influence in East Africa, besieging Portuguese fortresses. Omani forces captured Fort Jesus in 1698, only to lose it in a revolt (1728), but by 1730 the Omanis had expelled the remaining Portuguese from the coasts of present-day Kenya and Tanzania. By this time the Portuguese Empire had already lost interest in the spice-trade sea-route because of the decreasing profitability of that traffic. (Portuguese-ruled territories, ports and settlements remained active to the south, in Mozambique, until 1975.)

Omani Arab colonisation of the Kenyan and Tanzanian coasts brought the once independent city-states under closer foreign scrutiny and domination than was experienced during the Portuguese period. Like their predecessors, the Omani Arabs were primarily able only to control the coastal areas, not the interior. However, the creation of plantations, intensification of the slave trade and movement of the Omani capital to Zanzibar in 1839 by Seyyid Said had the effect of consolidating the Omani power in the region. The slave trade had begun to grow exponentially starting at the end of the 17th Century with a large slave market based at Zanzibar. When Sultan Seyyid Said moved his capital to Zanzibar, the already large clove and spice plantations continued to grow, driving demand for slaves. Slaves were sourced from the hinterland. Slave caravan routes into the interior of Kenya reached as far as the foothills of Mount Kenya, Lake Victoria and past Lake Baringo into Samburu country.

Arab governance of all the major ports along the East African coast continued until British interests aimed particularly at securing their ‘Indian Jewel’ and creation of a system of trade among individuals began to put pressure on Omani rule. By the late 19th century, the slave trade on the open seas had been completely strangled by the British. The Omani Arabs had no interest in resisting the Royal Navy’s efforts to enforce anti-slavery directives. As the Moresby Treaty demonstrated, whilst Oman sought sovereignty over its waters, Seyyid Said saw no reason to intervene in the slave trade, as the main customers for the slaves were Europeans. As Farquhar in a letter made note, only with the intervention of Said would the European Trade in slaves in the Western Indian Ocean be abolished. As the Omani presence continued in Zanzibar and Pemba until the 1964 revolution, but the official Omani Arab presence in Kenya was checked by German and British seizure of key ports and creation of crucial trade alliances with influential local leaders in the 1880s. Nevertheless, the Omani Arab legacy in East Africa is currently found through their numerous descendants found along the coast that can directly trace ancestry to Oman and are typically the wealthiest and most politically influential members of the Kenyan coastal community.

The first Christian mission was founded on 25 August 1846, by Dr. Johann Ludwig Krapf, a German sponsored by the Church Missionary Society of England. He established a station among the Mijikenda at Rabai on the coast. He later translated the Bible into Swahili. Many freed slaves rescued by the British Navy are settled here. The peak of the slave plantation economy in East Africa was between 1875 – 1884. It is estimated that between 43,000 – 47,000 slaves were present on the Kenyan coast, which made up 44 percent of the local population. In 1874, Frere Town settlement in Mombasa was established. This was another settlement for freed slaves rescued by the British Navy. Despite pressure from the British to stop the East African slave trade, it continued to persist into the early 20th century.

By 1850 European explorers had begun mapping the interior.Three developments encouraged European interest in East Africa in the first half of the 19th century. First, was the emergence of the island of Zanzibar, located off the east coast of Africa. Zanzibar became a base from which trade and exploration of the African mainland could be mounted. By 1840, to protect the interests of the various nationals doing business in Zanzibar, consul offices had been opened by the British, French, Germans and Americans. In 1859, the tonnage of foreign shipping calling at Zanzibar had reached 19,000 tons. By 1879, the tonnage of this shipping had reached 89,000 tons. The second development spurring European interest in Africa was the growing European demand for products of Africa including ivory and cloves. Thirdly, British interest in East Africa was first stimulated by their desire to abolish the slave trade. Later in the century, British interest in East Africa would be stimulated by German competition.

In 1895 the British government took over and claimed the interior as far west as Lake Naivasha; it set up the East Africa Protectorate. The border was extended to Uganda in 1902, and in 1920 the enlarged protectorate, except for the original coastal strip, which remained a protectorate, became a crown colony. With the beginning of colonial rule in 1895, the Rift Valley and the surrounding Highlands became reserved for whites. In the 1920s Indians objected to the reservation of the Highlands for Europeans, especially British war veterans. The whites engaged in large-scale coffee farming dependent on mostly Kikuyu labour. Bitterness grew between the Indians and the Europeans.

This area’s fertile land has always made it the site of migration and conflict. There were no significant mineral resources—none of the gold or diamonds that attracted so many to South Africa.

Imperial Germany set up a protectorate over the Sultan of Zanzibar’s coastal possessions in 1885, followed by the arrival of Sir William Mackinnon’s British East Africa Company (BEAC) in 1888, after the company had received a royal charter and concessionary rights to the Kenya coast from the Sultan of Zanzibar for a 50-year period. Incipient imperial rivalry was forestalled when Germany handed its coastal holdings to Britain in 1890, in exchange for German control over the coast of Tanganyika. The colonial takeover met occasionally with some strong local resistance: Waiyaki Wa Hinga, a Kikuyu chief who ruled Dagoretti who had signed a treaty with Frederick Lugard of the BEAC, having been subject to considerable harassment, burnt down Lugard’s fort in 1890. Waiyaki was abducted two years later by the British and killed.

1911 map
A key to the development of Kenya’s interior was the construction, started in 1895, of a railway from Mombasa to Kisumu, on Lake Victoria, completed in 1901. This was to be the first piece of the Uganda Railway. The British government had decided, primarily for strategic reasons, to build a railway linking Mombasa with the British protectorate of Uganda. A major feat of engineering, the “Uganda railway” (that is the railway inside Kenya leading to Uganda) was completed in 1903 and was a decisive event in modernising the area. As governor of Kenya, Sir Percy Girouard was instrumental in initiating railway extension policy that led to construction of the Nairobi-Thika and Konza-Magadi railways.

Some 32,000 workers were imported from British India to do the manual labour. Many stayed, as did most of the Indian traders and small businessmen who saw opportunity in the opening up of the interior of Kenya. Rapid economic development was seen as necessary to make the railway pay, and since the African population was accustomed to subsistence rather than export agriculture, the government decided to encourage European settlement in the fertile highlands, which had small African populations. The railway opened up the interior, not only to the European farmers, missionaries and administrators, but also to systematic government programmes to attack slavery, witchcraft, disease and famine. The Africans saw witchcraft as a powerful influence on their lives and frequently took violent action against suspected witches. To control this, the British colonial administration passed laws, beginning in 1909, which made the practice of witchcraft illegal. These laws gave the local population a legal, nonviolent way to stem the activities of witches.

By the time the railway was built, military resistance by the African population to the original British takeover had petered out. However new grievances were being generated by the process of European settlement. Governor Percy Girouard is associated with the debacle of the Second Maasai Agreement of 1911, which led to their forceful removal from the fertile Laikipia plateau to semi-arid Ngong. To make way for the Europeans (largely Britons and whites from South Africa), the Maasai were restricted to the southern Loieta plains in 1913. The Kikuyu claimed some of the land reserved for Europeans and continued to feel that they had been deprived of their inheritance.

In the initial stage of colonial rule, the administration relied on traditional communicators, usually chiefs. When colonial rule was established and efficiency was sought, partly because of settler pressure, newly educated younger men were associated with old chiefs in local Native Councils.

In building the railway the British had to confront strong local opposition, especially from Koitalel Arap Samoei, a diviner and Nandi leader who prophesied that a black snake would tear through Nandi land spitting fire, which was seen later as the railway line. For ten years he fought against the builders of the railway line and train. The settlers were partly allowed in 1907 a voice in government through the legislative council, a European organisation to which some were appointed and others elected. But since most of the powers remained in the hands of the Governor, the settlers started lobbying to transform Kenya in a Crown Colony, which meant more powers for the settlers. They obtained this goal in 1920, making the Council more representative of European settlers; but Africans were excluded from direct political participation until 1944, when the first of them was admitted in the Council.1