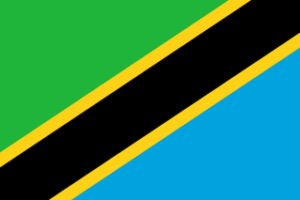 Tanzania sits with the Indian Ocean to the east, and its 365,755 square miles (ranked 31st in the world) is surrounded by Mozambique on the south, Zambia and the Democratic Repbulic of the Congo to the east, Uganda on the northeast, and Kenya on the north. Over 59 million people live in this country strewn with areas of bush, savannah, and interspersions of mountains with volcanic origins.

In the uncharted centuries of prehistory, Tanzania is criss-crossed by tribal trade routes linking the Great Lakes (Victoria and Tanganyika) with the coast. These are the same routes along which Arab traders subsequently move inland, searching for slaves and ivory.

On 7 August 1885 five German warships steam into the lagoon of Zanzibar and train their guns on the sultan’s palace. They have arrived with a demand from Bismarck that Sultan Barghash cede to the German emperor his mainland territories or face the consequences.

But in the age of the telegram, gunboat diplomacy is no longer a local matter. This crisis is immediately on desks in London. Britain, eager not to offend Germany, suggests a compromise. The two nations should mutually agree spheres of interest over the territory stretching inland to the Great Lakes. This plan is accepted before August is out.

The embarrassed British consul finds himself under orders from London to persuade the sultan to sign an agreement ceding the lion’s share of his mainland territory, with the details still to be decided. In September the German gunships begin their journey home. A joint Anglo-German boundary commission starts work in the interior.

By November 1886 the task is done and the result is agreed with the other main colonial power, France. The sultan is left a strip ten miles wide along the coast. Behind that a line is drawn to Mount Kilimanjaro and on to Lake Victoria at latitude 1° S. The British sphere of influence is to be to the north, the German to the south. The line remains to this day the border between Kenya and Tanzania.

The administration of the territory in the agreement of 1886 is handed over to Karl Peters’ German East Africa Company. The company extends its territory to the sea from 1888, by buying a lease of the coastal strip which was left in the sultan of Zanzibar’s possession. But local resentment leads to a Muslim uprising in that year which is only suppressed after the arrival of German troops (assisted on this occasion by the British navy).

The inadequacy of the company causes the German government to take direct control in 1891. But Karl Peters retains his involvement, being appointed imperial commissioner. There follow two decades in which the German authorities make considerable efforts to develop their east African colony.

After the end of the war the treaty of Versailles, in 1919, grants Britain a League of Nations mandate to govern the former German East Africa – which now acquires a new name, Tanganyika.

British policy from the 1920s onwards is to encourage indigenous African administration along traditional lines, through local councils and courts. A legislative council is also established in Dar es Salaam, but African members are not elected to this until after World War II. By then local political development is an obligation under the terms of UN trusteeship, in which Britain places Tanganyika in 1947.

During the 1950s a likely future leader of Tanganyika emerges in the person of Julius Nyerere. Son of a chief, a convert to Roman Catholicism while studying at Makerere college in Uganda, then an undergraduate for three years in Edinburgh university, Nyerere returns to Tanganyika in 1953.

He immediately founds a political party, TANU or the Tanganyika African National Union (evolving it from an earlier and defunct Tanganyika African Association). From the start its members feature prominently in elections to the legislative assembly. When independence follows, in 1961, Nyerere becomes the new nation’s prime minister. In 1962 Tanganyika adopts a republican constitution and Nyerere is elected president.

In 1964 Nyerere reaches an agreement with Abeid Karume, president of the offshore island of Zanzibar which has been so closely linked in its history to the mainland territory of Tanganyika. The two presidents sign an act of union, bringing their nations together as the United Republic of Tanzania. Nyerere becomes president of the new state, with Karume as his vice-president.

Nyerere, by instinct an idealistic socialist, declares his political creed in a document of 1967 known as the Arusha Declaration. This announces the introduction of a socialist state and is accompanied by the nationalization of key elements in the economy. The Arusha Declaration puts agriculture at the centre of the national economy and introduces a programme of ‘villagization’ – meaning the moving of peasant families into cooperative villages where they can supposedly work together more productively.

As elsewhere where such cooperatives have been tried, they prove both unpopular and inefficient. When Nyerere relinquishes executive power voluntarily in 1985, he admits that his economic policies have failed.

When Nyerere stands down as president, in 1985, he remains chairman of the CCM (Chama Cha Mapinduzi). President Mwinyi promulgates a new democratic constitution in 1992, with the stipulation that political parties will only be registered if they are active in both Tanganyika and Zanzibar, and if they are not identified with specific religious, regional, tribal or racial groups.

Elections are held in 1995. The CCM just wins in Zanzibar, where opposition anger at electoral malpractice disrupts polital life for the rest of the decade. In Tanganyika the CCM candidate Benjamin Mkapa is elected president of the union, but only after all his rivals have withdrawn from the race alleging ballot-rigging.

During the 1990s very great strain is placed on an already impoverished Tanzania by the ethnic conflicts over the border in Rwanda and Burundi. During a single 24-hour period in 1994 as many as 250,000 Rwandan refugees stream into Tanzania. Eventually the total is 550,000 from Rwanda and 100,000 from Burundi. Many of them are still in Tanzania at the end of the decade.1