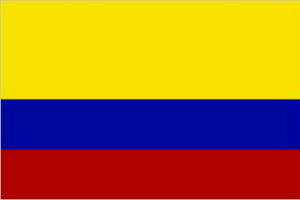 Early Colombia. For thousands of years before Europeans arrived Amerindians lived in what is now Colombia. Some lived by fishing and hunting but some lived by farming. The first Spaniard to land in the area was Alonso de Ojeda in 1500.

However, there was no permanent Spanish settlement until 1533 when Cartagena and Santa Marta were founded. Bogota was founded in 1538. In 1564 Colombia was made a captaincy-general. The colony thrived and many African slaves were taken there.

However, in 1808, Napoleon made his brother king of Spain but many people in the Spanish colonies refused to accept the new king. In 1810 most of Colombia declared independence. It did not last long. The Spanish re-conquered the area in 1815-16. Yet in 1819 Simon Bolivar defeated the Spanish at the battle of Boyaca. Subsequently, a new nation was formed consisting of Colombia, Panama, Venezuela, and Ecuador. The new nation was called the Republic of Colombia.

However regional differences caused the new country to break up. Bolivar became dictator in 1828 but he resigned in 1830 and Colombia (including what is now Panama) became separate from Ecuador and Venezuela.

However, Colombia was a troubled country and 8 civil wars took place during the 19th century. Furthermore, by 1849 there were 2 political parties, one conservative, representing the landowners and the Catholic Church, the other liberal, representing the merchants and craftsmen. Political instability continued through the late 19th century and in 1899 a terrible civil war called the War of a Thousand Days was fought. Then in 1903 Panama broke away and became an independent nation.

Modern Colombia. In the early 20th century Colombia was, generally peaceful and the economy developed. Exports of coffee increased.

However, in 1948, another civil war broke out. It was called La Violencia. Colombia had always been dangerously divided into liberals and conservatives but the assassination of liberal politician Jorge Eliecer Gaitan on 9 April 1948 was the spark that lit the fire. The army was on the side of the conservatives and in 1953 General Gustavo Rojas Pinilla became dictator.

However in 1957, Rojas stepped down and the two parties, Liberal and Conservative agreed to share power. Between 1957 and 1974 the presidency alternated between them.

However, in the 1960s left-wing guerrillas began operating in Colombia. Then in the 1970s cocaine production in Colombia increased and it continued to increase in the 1980s. The drug trade led to a great deal of violence. Meanwhile, in the early 1980s, Colombia was hit by a severe recession.

Yet in the early 21st century the situation in Colombia improved. Violence in Colombia declined after 2002. Furthermore, the Colombian economy grew rapidly and poverty and unemployment declined. Colombia, like the rest of the world, suffered in the recession of 2009 but the economy soon recovered. Colombia also suffered severe floods in 2010. However, tourism in Colombia is growing. Today Colombia is developing steadily. In 2020 the population of Colombia was 50 million.1