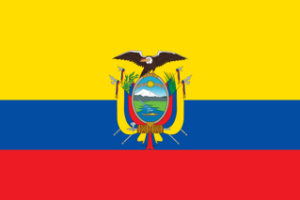 History of Ecuador.The coastal section and the high Andean basins situated in modern day Ecuador, were populated by Indian tribes when the first Europeans reached the area’s Pacific coast in 1526. The Incan Empire extended over the highland area to an area near to Quito. The first Spanish settlement in Ecuador was established in 1534 at Quito on the site of an important Incan town of the same name. Another settlement was established four years later near the river Guayas in Guayaquil. Expeditions initiated by Francisco Pizarro, who discovered and occupied Peru, founded the settlements and extended Spanish rule over the highland basins and coastal lowlands. Ecuador was part of the Viceroyalty of Peru until 1740, when it was transferred to the Viceroyalty of New Granada (together with Colombia and Venezuela). With hardly any gold or silver, Ecuador did not draw many Europeans settlers throughout the Spanish colonial period, which lasted until 1822.

The first rebellion against Spanish rule took place in 1809, but only in 1822 did Ecuador gain independence as part of the Federation of Gran Colombia, from which it withdrew in 1830. A long period of conflict and instability followed, caused mainly by struggles between conservative and liberal elements, clerical and anticlerical movements and large landowners and owners of small farms and plantations. The country was run by dictators and the army played an important role in internal politics. During the first century of its independence, Ecuador had changed its constitutions 13 times and only a small number of its presidents had managed to serve a full four-year term.

The economic development associated with the cocoa boom at the end of the 19th and the first quarter of the 20th century helped to perk up and stabilize the country’s administration despite the recurrent turnover in rulers – 18 presidents between 1897 and 1934 and 25 presidents between 1934 and 1988.1